Social mobility and intersectionality, the case of the Mapuche indigenous people in Chile

Why is intersectionality so necessary in social mobility studies?

In this post, I begin with a brief explanation of who the Mapuche people are, then an examination of the concept of intersectionality in terms of how the concept has become an important way of analysing identities. Finally, I will focus on the work of Nicola Rollock in order to show how intersectional analysis can help us to understand the complexity of processes of social mobility.

But the first the question is: who are the Mapuche people? The Mapuche people are the largest indigenous group in Chile, they are located in the southern part of Chile and Argentina. According to the last census (2017) more than 1,745,000 people identify as Mapuche (9.9% of the Chilean population), and 614,000 of them live in the Metropolitan Region. Racism in Chile is a deeply rooted issue, which can be explicit or implicit, according to the dynamic of power relations. The relationship between the Mapuche population and the Chilean state has historically been characterised by colonial injustice, economic disadvantage, racism and discrimination (Ruiz 2008). 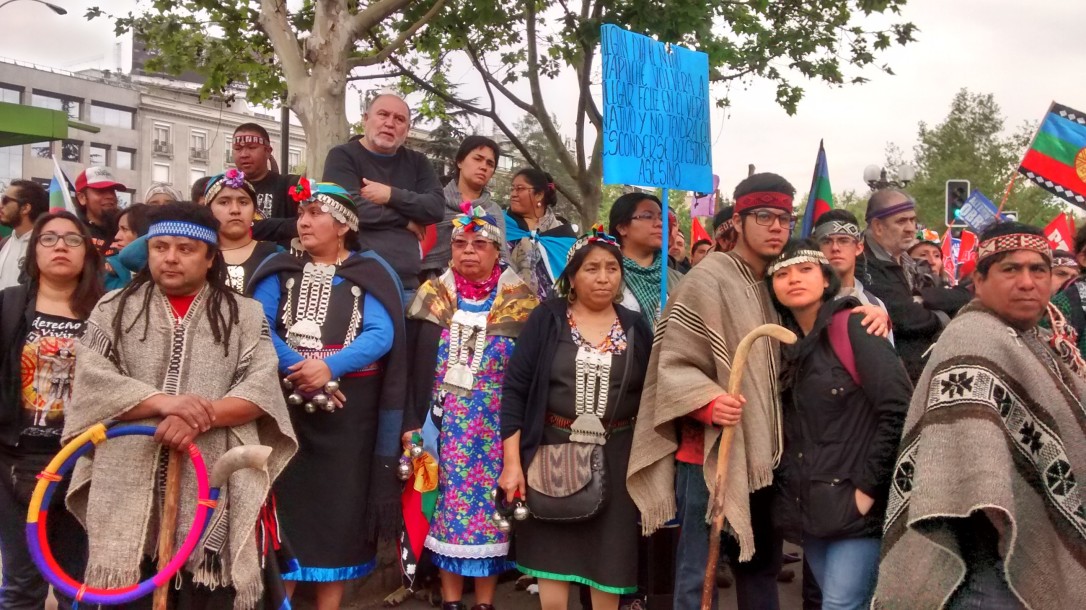 After the end of the dictatorship in 1990, the Chilean government started to implement new policies and initiatives directed toward indigenous peoples, including the formation of the National Indigenous Development Corporation CONADI (1993). CONADI works to develop policies to improve indigenous peoples’ access to quality education. The government created an indigenous scholarship scheme in 1992 to enable indigenous people with good marks who face financial difficulties to stay in the education system (Benavente and Álvarez, 2012).

Indigenous people’s entry into higher education is therefore a recent event. Despite the barriers to higher education, some indigenous people have managed to overcome the structural obstacles and go on to experience a degree of educational upward mobility that serves to produce social diversity among the Mapuche (see Fajardo and Ramirez 2012). Mapuche professionals are very much a minority in the middle-class in Chile. According to a United Nations Development Programme study (PNUD, 2017), in Chile, class inequalities have a strong ethnic and racial connotation, and most upper-class people are mestiza/white, while indigenous peoples tend to occupy the lowest positions in the social structure.

The term intersectionality was used for the first time by Kimberle Crenshaw (1989) when she tried to show how exclusion is a complex situation that is not only related to class, gender or race, but is a situation of structural disadvantage that involves all of these. From a feminist and legal perspective, Crenshaw showed the complex nature of the marginalization of black woman in the United States. She used the metaphor of a road intersection to show that the legal arguments of companies with antidiscrimination policies did not cover the overlapping nature of either the race or gender discrimination that black women suffered (Byrne, 2015). Crenshaw was worried that black women were excluded from feminist and anti-racist perspectives, and she argued that the exclusion of black women had to be rethought and recast, in order to change our analytical structure (Crenshaw, 1989).

For my research, intersectionality is understood as an analytical model, in which relational social dimensions such as class, gender, ethnicity, migration, and discrimination (among others) are all in engagement with each other. This approach is adopted in order to reveal the complexity of the different dimensions of social inequalities.

An important contribution, which has focused on the upward social mobility experiences of ethnic minorities, is the work of Rollock and colleagues (2012, 2013, 2014 and 2015), specifically emphasising their experiences in higher education. This work, developed from the project ‘The educational strategies of the black middle-classes’, suggests that ethnicity and gender are essential components to the analysis of the complex inequalities experienced by socially mobile black professionals. Their theoretical framework is based on Bourdieu (1984) and Critical Race Theory (Delgado and Stefancic, 2001) and demonstrates the complex, multifaceted and contradictory nature of race inequality, which must be analysed in terms of several capitals which work differently (or have different value) according to race (Rollock, 2012).

Rollock criticises the work of Savage et al (2013) and Bourdieu (1984) for not recognising how class locations, dispositions and capitals are all inflected by race; she argues that ‘class identity cannot be fully understood without taking account of the intersecting role of race’ and that we must recognise the ‘the extent to which classed capitals are seen to have weight, worth or legitimacy for different ethnic groups’ (2014: 444, 445). In particular, she argues that the extent to which middle-classness is associated with whiteness is under-appreciated, and that ‘the intersection of race (white), class (middle) and gender (male) is reflective of a hierarchical power dynamic that is evidenced – yet seldom named by those embodying that identity profile – across the academy or other sectors’ (Rollock, 2014: 446). Following this argument, racial identity should not only be focused on minorities, since this also includes white people. This focus on the ‘whiteness’ of the middle-class helps to explain the ambivalent position of black professionals. They use class signifiers and capitals ‘to facilitate access to, and a certain acceptance within, mainly white (middle class) spaces but crucially, they also disturb and disrupt the fixed, stereotypical perceptions that many whites hold about blacks’; however the whiteness of the middle-class field means that the ‘dispositions that are seen to comprise “fit” are exactly those which keep the black middle classes on the fringes of middle classness’ (Rollock, 2014: 446, 449).

Rollock’s work (2014) is also focused on how people perceive their class location, arguing that it is necessary to account for the role of race in shaping class location and identity. It has been argued that people who experience social mobility develop strategies to fit into their old and new locations. Also, these strategies were used to help minimize the probability of racial discrimination. This cultural toolkit against discrimination was founded on the way people used language as a vehicle to identify themselves in a social group, as well as mannerisms and body dispositions, clothing and credentials – with all of these related to class but also to gender and race (Rollock, 2011). Rollock’s respondents spoke of how ‘whites act to protect the boundaries of white middle-class spaces’ (Rollock, 2014: 448), and so black people had to develop skills to fit into a white space: changing their accent, the way they spoke, despite the fact that they had the ‘the appropriate’ capitals, developing skills to be legitimised in a white structure.

My research is influenced by the work of Rollock and acknowledges that race and ethnicity are important to understand process of identification of people and social mobility experiences, such as indigenous people. It is therefore possible to demonstrate the complex ways in which indigenous people negotiate their identities and the complicated processes of their social mobility transitions.

Denisse Sepulveda Sanchez obtained her Sociology PhD at the University of Manchester. Her research explores the consequences of the social mobility of indigenous people in Chile and how they negotiated their class and ethnic identities.

Byrne, B. (2015). Rethinking intersectionality and whiteness at the borders of citizenship. Sociological Research Online, 20 (3), 16.

View all posts by bsapgforum

Tell us what you think... Cancel reply